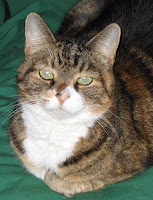 Prior to the time that the Baypath Humane Society in Hopkinton became a "No Kill" shelter, Casey was there on the list of cats to be euthanized simply because she'd had the bad luck to be placed in a room in which several other felines had developed severe upper respiratory disease. Much to my horror, the Manager of the Shelter, along with some of the then-Board members, had determined that the only way to permanently eradicate the problem was to evacuate and euthanize any cat who had been exposed. I couldn't save everyone, but I did save Casey. And we've been best friends ever since.

So when I got up this morning and saw Casey vomit a few times, I took notice. I wasn't overly worried until I observed that she was also straining to defecate, and seemed quite uncomfortable.

I quickly realized that I needed to get her to a vet, and bundled her up for the 45-minute ride to Countryside Veterinary Hospital in Chelmsford, where my animals have been clients for many years.

The staff at Countryside hurried us into an examination room, and before long, Dr. Tiffany Rule determined that Casey would need to be admitted to the hospital, for X-rays, IV fluids, and other diagnostic procedures.

Within an hour, Dr. Rule called me to let me know that the X-rays indicated that the large, palpable mass she felt was a severe bowel impaction, and that Casey was suffering from obstipation, and possibly, megacolon, which Dr. Arnold Plotnick describes as:

"a condition of extreme and irreversible dilation and poor motility of the colon, usually combined with accumulation of fecal material and the inability to evacuate it."

Obviously, not a good situation at all. Casey may have "idiopathic" megacolon, meaning that rather than being able to point to a specific cause of her condition, no one really knows why it would have happened to her.

Casey is currently being treated, and I'll know more tonight. In the interim, I've read everything I could find online and have joined the Feline Megacolon Yahoo Group, grateful to find so much information on a problem that was previously unknown to me.

I couldn't believe my eyes tonight when I turned on The Celebrity Apprentice and realized that this week's challenge called for the two competing teams to raise money for their pet charities by selling horse-drawn carriage rides.

Didn't anyone tell NBC about the pending efforts to ban the New York City carriage trade because of its cruelty to these horses? Apparently not, because the show promoted the traditional romantic view of a hansom cab ride around Central Park, and raised thousands of dollars by the sweat of the silent equine workers.

The powers that be should have shown more sensitivity to an issue that is rapidly gaining traction.

If you agree, you can sign the petition to ban the Carriage Horse Industry in New York City, sponsored by the Coalition to Ban Horse Drawn Carriages.
Posted by Maureen at 10:13 PM No comments:

Mike Taibbi of NBC Nightly News tonight did a poignant story about the plight of animals whose owners have faced foreclosure. But the animals he covered are the lucky ones. They have been taken in by shelters and sanctuaries such as The Catskill Animal Sanctuary in Saugerties, NY, a nonprofit haven for abused, abandoned, and neglected horses and farm animals. Since 2001, it has provided a safe and loving refuge for more than 1000 animals and birds. With its rafters full to capacity, the Sanctuary is currently expanding, in an effort to accommodate the overflow of hapless creatures who are the silent victims of the current real estate downturn.
Posted by Maureen at 9:38 PM 1 comment:

When Michael Vick's vicious pit bull fighting ring was exposed last year, I assumed that the hapless dogs would all be euthanized because they had been trained to fight to the death and could probably never be rehabilitated.

I was so wrong. As chronicled in Juliet Macur's article, "Given Reprieve, N.F.L. Star's Dogs Find Kindness," in today's New York Times, each of the 48 pit bulls was individually evaluated and only one was found to be beyond salvation.

A few have actually already been adopted, but most are in the care of a few specialist Rescue organizations such as the Best Friends Animal Society in Utah, which is currently caring for 22 of the former fighters, all of whom are carrying deep physical and emotional wounds.

Most poignant of these survivors is Georgia, whose 42 teeth were brutally removed, presumably to render her incapable of biting male dogs during repeated forced breedings.

“I’m worried most about Georgia,” said the Best Friends veterinarian Dr. Frank McMillan, an expert on the emotional health of animals, who edited the textbook “Mental Health and Well-Being in Animals.” “You don’t have the luxury of asking her, or any of these animals: ‘What happened to you in your past life? How can we stop you from hurting?’

“So here we are left with figuring out how to bring joy to her life,” he said of Georgia, known to lick the face of anyone who comes near. “We want to offset the unpleasant memories that dwell in her brain.”

I don't know whether or not Best Friends, or the other caregivers of the former Vick dogs, has enlisted the services of an animal communicator, but it certainly seems like it would be a good idea.

According to John Garcia, the assistant dog care manager at Best Friends:

“The biggest job we have with these guys is teaching them that it’s O.K. to trust people. It may take months or years, but we’re very stubborn. We won’t give up on them. . .These dogs have been beaten and starved and tortured, and they have every reason not to trust us,” Mr. Garcia said as Georgia crawled onto his lap, melted into him for an afternoon nap and began to snore. “But deep down, they love us and still want to be with us. It is amazing how resilient they are.”

This is a must-read article, along with the accompanying slide show, narrated by Garcia.