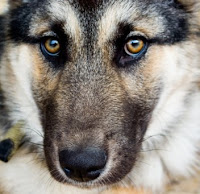 "How to Talk to Animals"
Dog Trainer and Behaviorist Darlynn Tracy-Oberg of The Right Paw in Princeton and Maureen Harmonay of Animal Translations have just announced that we'll be presenting a morning seminar on "How to Talk to Your Pets and Influence Their Behavior" at The Right Paw in Princeton on Saturday, December 6th, from 8:30am to 12:00noon.

Darlynn will address the topic from her perspective as the owner of The Right Paw Dog Obedience school in Princeton, MA and a member of the

I'll be discussing the use and importance of

telepathy in interspecies communication, and how humans can use telepathy to receive and transmit messages from the animals in their care.
Attendees can enter to win a free Animal Communication Consultation!

A $6.00 donation is requested, with all proceeds to be distributed (at the attendees' option) to one of three local animal charities: NEADY Cats in West Boylston, Save A Dog in Framingham, or the Worcester Animal Rescue League.

Seating is limited, so please let us know you're coming by sending a note to Maureen at MHarmonay@gmail.com.

Posted by Maureen at 2:12 PM No comments:

I'll be the featured speaker at tonight's "Whiskers and Tails" lecture series, sponsored by the Merrimack River Feline Rescue Society at the Newburyport Public Library from 6:30-7:30pm.

I know it's raining, but join us, if you can!

I'll be talking about how cats (and other animals) use telepathy to send and receive information, how people can influence their cats' behavior by understanding how they perceive and interpret human thoughts and intentions, and how we can better understand their seeming behavioral quirks by just asking them what's going on!

Attendees will have an opportunity to win a free animal communication consultation for the animal of their choice.

Hope to see you there!

Posted by Maureen at 2:05 PM No comments:

Looking Forward to The Breeders' Cup, I think
Like all thoroughbred racing enthusiasts, I look forward to the Breeders' Cup with great anticipation each fall, hoping to see the very best horses in the world strut their stuff. And this year, for the first time, there are two days of top racing, with the addition of three new races (Juvenile Fillies Turf, Turf Sprint, and Marathon), beginning on Friday afternoon, October 24th and continuing on Saturday afternoon, October 25th. You can see it on ABC (Saturday) and ESPN (Friday and Saturday).
But I will admit that last year's Breeders' Cup, and the one before that, lost their lustre for me when the great European champion George Washington broke his ankle and had to be put down on the muddy Monmouth track during the Breeders' Cup Classic (2007) and when the gallant three-year-old filly Pine Island fell on the backstretch of the Ladies' Classic (2006) at Churchill Downs and had to be immediately euthanized to end her suffering. I still think about them, with great sadness.
It's clear that the Breeders' Cup Board wants to avoid a repeat of these disasters at all costs, and partly with that in mind, I think, they have awarded two consecutive runnings (2008 and 2009) of the prestigious championship series to Santa Anita, which has worked hard to create a racing-safe surface. After having disastrous results with the synthetic Cushion Track, which had been installed last fall, Santa Anita went back to the drawing board and eventually hired Australian Ian Pearce to do a complete overhaul of the oval's surface, using his patented all-weather Pro-Ride synthetic product. The Pro-Ride surface has been cautiously applauded by horsemen and jockeys, though there have been five fatal breakdowns on it since Santa Anita reopened on September 24th.

The question looming over this year's Breeders' Cup is: will the Pro-Ride surface be able to prevent catastrophic breakdowns of the kind we've seen in at least the last three years' of this event?

And so it was with great interest that I read Marshall Gramm's fascinating analysis, "Injuries/Breakdowns at the Breeders' Cup," with a year-by-year table documenting all of the competition's "nonfinishers," including injuries and fatalities since the inaugural event in 1984. Encouragingly, Gramm notes that "six of the seven Breeders' Cups contested in California have been incident free. There has never been a breakdown in (a) California Breeders' Cup."

For the sake of the horses, we can only hope for a much better outcome.

The Awful Truth About Declawing

I would never even consider declawing one of my feline companions, and I think that if other cat lovers understood the extent to which this amputation surgery maims and causes serious physical and psychological pain, they wouldn't do it, either.

According to Christianne Schelling, DVM:

"Declawing is actually an amputation of the last joint of your cat's 'toes.' When you envision that, it becomes clear why declawing is not a humane act. It is a painful surgery, with a painful recovery period. And remember that during the time of recuperation from the surgery your cat would still have to use its feet to walk, jump, and scratch in its litter box regardless of the pain it is experiencing."

As Jennifer Annis writes, in "Soft Paws An Alternative to Declawing Cats," in today's Greenwood, SC Index-Journal, cat people who are worried about the damage that claws can wreak on furniture and furnishings have other options, including scratching posts and vinyl claw caps called "Soft Paws." And of course, good old-fashioned nail trimming, which I admit (from personal experience) may be easier said than done.

But it's worth any hassle if it means sparing your cat the agony of having part of her toes ripped out. If your cats could talk (and I know they can!), they will thank you for keeping them whole.

Posted by Maureen at 9:39 AM No comments:

It is estimated that there may be as many as 80 million feral cats in this country, a number that is undoubtedly rising in this teetering economy, in which some people are facing the choice of feeding themselves or feeding their pets.
I was horrified to learn that about two-thirds of all cats entering shelters in the U.S. are killed, based on the latest available data (for 2006) and that only 2% are reunited with their original owners.
When it comes to feral cats, the percentage of those who are "euthanized" rises to almost 100%.

This mass killing doesn't have to happen if more of us would get involved in promoting safe alternatives so that humans and feral felines can share a common community without feeling threatened by one another.

Vote for the Dogs, Vote "Yes" on Question 3 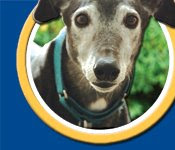 I am sure that some of the people who are involved with greyhound racing really care about their dogs, and treat them kindly.

But the evidence shows that commercial dog racing is not conducted in the best interests of the greyhounds, who often sacrifice their lives and limbs and suffer from inhumane confinement in the service of what I hate to describe as a sport.

Massachusetts has two greyhound tracks: Raynham Park and Wonderland Greyhound Park. It takes at least 1000 dogs to keep them going.

But since 2002, when the state required the tracks to submit records of greyhound racing injuries, more than 800 greyhounds have been seriously hurt. And countless others have died.

It's time to end this cruelty. And thanks to a coalition of committed dog lovers and concerned citizens, we can.

Whatever your political beliefs, when you go to the polls on November 4th, vote "Yes" on Question 3.
Posted by Maureen at 11:19 AM No comments:

Animal Translations Announces the 2008 Halloween Animal Story Contest!
Do you have a funny, interesting, or scary Halloween story about something that occurred with one or more of your animals?

Please send your original tale (with photos, if available) to Maureen Harmonay of Animal Translations at: MHarmonay@gmail.com.

If your story is chosen, you'll receive a free animal communication consultation for the animal of your choice. Your story will also be published in next month's issue of the eNewsletter, "What's Up With Animals?"

The deadline for entries is Thursday, October 30th, 2008. Winners will be announced on Halloween, October 31st!

Posted by Maureen at 8:00 AM No comments: