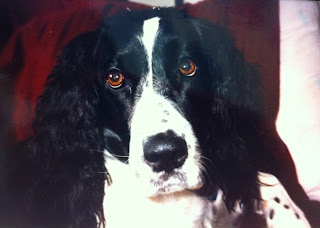 A large measure of the anguish we inevitably feel when cherished animal companions die is the knowing that we will never see them again.  We can no longer caress them, walk with them, talk to them.  The sense of having a door irrevocably shut stings; there seems to be no way to open it again or to recover a semblance of the relationship that brought so much pleasure for so many years.  Only the pain is left in its wake.

But it does not have to be that way, as I've discovered through many "conversations" with animals in spirit, even years after they've abandoned their physical bodies.  And the vibrancy with which our animals live on was brought home again in a dramatic way, during a recent session with a beautiful springer spaniel, Emilie, the soulmate of a woman named Mollie.

All I knew about Emilie was that she had died.  I didn't know how or when.  Mollie wanted the consultation simply to see if Emilie was okay, and whether there were details of their life together that she would be able to share.

As soon as I tuned into her, Emilie came into focus as sharply as any living dog.  She gave the impression that there had been some congestion in her chest, and also mentioned problems with one of her eyes.  Mollie confirmed that the condition that had led to Emilie's death was a large tumor on her chest; she had also suffered from eye infections throughout her life.

Later in our session, Emilie revealed that her role in Mollie's life was as a surrogate child:  she hinted that Mollie had either miscarried, or that she couldn't have children.  That information seemed so personal that I wasn't sure how to relay it to Mollie, so I simply wrote, "She considered herself to be your baby, and there was a feeling that she was almost a surrogate child."

When she read that, Mollie gasped.  In fact, Mollie had indeed suffered a series of miscarriages, and had never had children.  She very much viewed her relationship with Emilie in precisely the way that Emilie had suggested, and I got chills when Mollie finally told me that Emilie had died nine years ago.  "I'm just flabbergasted," she admitted.  "Your session with Emilie brought back a lot of emotions."

What it taught me, yet again, is that the profound connection we forge with our animals is never broken, only changed.  They are still there for us, and though we do not fully understand how this can happen, it does not alter the fact that the ties between us remain real.
Posted by Maureen at 9:16 PM No comments:

Bay Bey's stall is still untouched, with clean bedding and wisps of hay scattered here and there.  Nothing about it belies the dreadful fact that when he tiptoed out the door yesterday afternoon, it was for the last time.  Like so many fallen horses--both famous and nondescript--Bey lost his life to the ravages of laminitis:  his elderly but still proud presence had withered in its wake.

The only kind thing was to let him go, and that is what Gwen regretfully did, loving her friend of 29 years more than fearing the grief that would engulf her as his spirit left him. 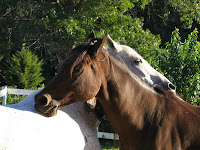 Hayley watched behind locked doors as Bey was led away, but she protested and paced and called to him, without understanding the awful truth of what was to come.  She would never again be able to run her lips lovingly over his withers, or play-race him uphill for supper at the end of a late summer's day.  For more than five years now, they've been constant, faithful companions, rarely leaving each other's side and luxuriating in their peaceful friendship as one by one, the seasons passed.

By the time Hayley was released from her prison, Bey had been laid to rest in a deep grave in the corner of a grassy paddock, gently placed next to Gwen's old Arab mare, Gracie, who had died only a few months after Hayley's arrival at the tranquil Harvard farmstead.  All Hayley knew now was that Bey was missing, and she galloped wildly through every inch of the three fenced pastures, tossing her head and shrieking with fear and disbelief that she could not find him. 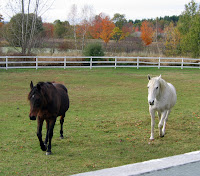 An observer saw Hayley persist in her desperate search for quite a while before she abruptly stopped at the spot where several feet of fresh dark dirt covered Bey's body.  Hayley smelled the air and she sniffed the ground, and she even stood right on top of the neatly smoothed-over patch, as if Bey were but hiding behind an earthen door and could reappear at her beckoning.

I arrived as darkness encompassed the barn and sensed that Hayley seemed distracted, but not yet fully resigned to the finality of having been left behind, and alone.  She still seemed to have hope.

By today, something had shifted.  Hayley's thick winter coat was drenched with sweat even as dusk's coolness came, and though she seemed more composed, I knew that she must have spent the day running her heart out.  There was something about her tonight that brought all of the sadness of losing Bey back again, with full force.  Her whole self seemed deflated of the joy of anticipation, and for many long minutes she did nothing but yawn and yawn and yawn, as if a terrible tiredness had settled in.

I wanted so much to protect Hayley, but not by pretending that her search would be fulfilled.  With that thought in mind, I slowly opened the door to Bey's stall, and watched as Hayley strolled in, repeating a pattern I'd witnessed hundreds or thousands of times.  We had so often found them huddled together in a place meant for one, preferring crowded camaraderie to the relative spaciousness of an unshared stall.

This time, Hayley strode in carefully, and silently snorted through every inch of the now vacant stall, poking under leftover hay strands with perked ears.  But suddenly and in slow motion, she seemed to understand what I was trying to show her, and she ambled out of Bey's space with her head hanging down just as low as it would go.

Alone now in her own stall, Hayley sighed deeply, then nickered for dinner.  She seems to know that her life will go on, but it will never be the same, for any of us.
Posted by Maureen at 9:32 PM No comments: 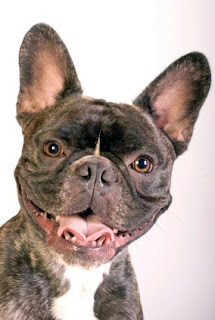 Through the end of November, I'm offering a 20% discount on telepathic consultations with all animals whose breed begins with the letter "F."
The reduced rates this month apply to Fjords, Friesians, Field Spaniels, Flat Coated Retrievers, French Bulldogs, and to all other breeds of dogs, cats, horses, or other animals whose breed begins with the sixth letter of the alphabet.  Both new and current clients of Animal Translations are invited to take advantage of this program.

I'll continue the "ABCs of Animal Communication" promotion in December, when it will be offered to breeds that begin with the letter "G."

The standard fee for an animal communication consultation is $75.  Clients whose animals qualify for the reduced rate this month can purchase a session for $60 by visiting the Animal Translations website.
Posted by Maureen at 2:43 PM No comments: