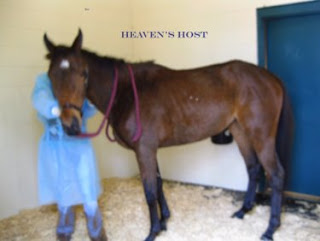 Brenda Hemphill isn't saying how two thoroughbred fillies from Florida ended up at her notorious farm in Maine. But what we do know is that horses who are unlucky enough to land there often end up on a one-way truck to a Canadian slaughterhouse. And if it were not for emergency intervention by Pure Thoughts Rescue's Florida Thoroughbred Rehab & Placement, these young horses would have met the same fate.

On March 16th, Pure Thoughts founders Brad Gaver and Jennifer Swanson were tipped off that the former Florida horses were in harm's way at the Hemphill farm. They became alarmed after having read a recent Boston Globe article in which Brenda Hemphill admitted that she makes her money by marketing horses for meat.

But when they called her, Hemphill tried to pass off the fillies as "camp horses" who had been living in Maine for some time. It was the first of many lies the Rescue would be told. "Knowing that one of the thoroughbreds had just turned three, had raced last summer, and that the horses arrived in the last 10 days, the story did not add up," said Gaver.

Read the rest of the story on Examiner.com
Posted by Maureen at 10:20 AM No comments:

For 10 years, Equine Protection of North America (EPONA) has saved homeless, abused, and neglected horses, and placed them in loving homes. But on Tuesday, March 16th, the Epping, New Hampshire-based nonprofit rescue announced that it was permanently closing its doors, leaving the fates of three remaining "special needs" horses still up in the air. They must find new placements by month's end.

EPONA President Catherine Blake explained that, "in this economy, we are just not able to make ends meet. It's heartbreaking."

On behalf of EPONA, Ms. Blake is reaching out to anyone who may be able to provide temporary or permanent care for:

Iceman, a 17-year-old thoroughbred gelding (pictured above), who is a grandson of the great Northern Dancer. In his earlier days, Iceman was quite an athlete himself, having had a successful career as a high-ranking jumper and three-day eventer. But by the time he got to EPONA, he had been the victim of long-term neglect. He was diagnosed with Uveitis, or "Moon Blindness," and had lost the vision in one of his eyes. The damage caused by the inflammation in the grand gelding's eyes made it necessary to remove them. Though completely blind, Iceman has led a happy life romping in the paddock with his seeing-eye companions, including Prize (below).

Read the rest of this story at Examiner.com
Posted by Maureen at 9:07 PM No comments: 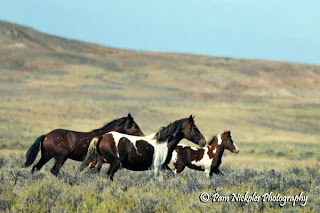 With the euthanasia of two more elders from the wild horse bands that formerly inhabited Nevada's Calico Mountain Complex, it is becoming increasingly difficult not to conclude that the BLM has a calculated plan to break down the hierarchy of familial groups by eliminating their most senior members.

Within the last 48 hours, a 20-year-old "poor conditioned" mare was euthanized because of purported hyperlipemia and metabolic failure, the diagnosis du jour for most of the horses who have been put down. We don't know if she was in foal, or whether she had a foal by her side. We never do.

And just today, a 25-year-old stallion was euthanized due to "poor condition" as a result of "tooth loss."

Read the rest of the story on Examiner.com