The Guns of September 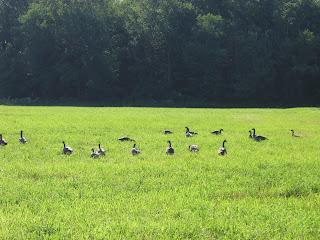 Every morning during the month of August, I delighted to see dozens of Canada Geese lazing in small groups throughout a verdant hay field in Holden.  I would try to count them, but there were so many, I couldn't.   On some days, there had to be 60, or more.  They were relaxed and happy and peaceful, and my dogs and I nodded silently at their beauty and majesty as we passed the flocks during our daily morning walk.  The geese felt safe in that field, with no thought of danger.  They've been coming to this same haven for years.

On Friday, they were gone, without a trace.  I assumed they'd started their fall migration, and wished them well.  But then on Sunday morning, I heard the familiar sound of honking hordes, and saw 20 or 30 of them circle the field, and then land.  Were these the geese of August, or a new battalion, stopping to fuel and then continue their southerly journey.  I didn't know.

Yesterday, it happened again.  A V-formation of geese suddenly appeared in the sky and then gently floated into the quiet grass, in slow motion.  I was awed at their precision.

But this morning, everything changed.  Dozens of geese flew so low that I could hear their wings flapping as they passed overhead.  As I watched them veer in search of a soft landing, I was horror struck at the simultaneous boom of guns and the gut-wrenching sight of one, two, three geese felled from the sky, without warning, by greedy and blood-thirsty hunters who had been hiding in wait.

Perhaps a half-dozen of the geese had already landed--their fate unknown--but the ones in flight immediately understood that something was terribly wrong, and wafted out of reach as fast as they could.  I felt sick, and heartbroken as I spied the three hunters, almost literally smacking their chops, hungry for more.  The blood of the geese they'd already spilled wasn't enough.  They'd wait for the flock to return, as they knew it would.  I complained loudly and bitterly to the men, but they just sneered.

My heart stopped as I saw the huge flocks circle back to where some of them had been shot down.  Here we go again, I thought.  I couldn't bear to watch the continued carnage.  The geese were heading in my direction, and I could hear the hunters cock their guns behind me.  With all my heart, I said, "no, no, go back, go back!"  It felt like I was watching the rerun of a violent movie, and I braced myself for what was to come.

But then magically, the geese somehow realized that if they continued on their intended trajectory, the formerly welcoming pasture would become their killing field, and as one, they turned away, beyond the guns' reach.  I don't know how they knew, but I was grateful that at least for this morning, no more geese would fall from this sky.  They remain at risk through September 25th, and I cringe at how many more will be brutally shot down throughout this Commonwealth, all in the name of sport.
Posted by Maureen at 10:35 AM