A Dog Beckons from the Beyond 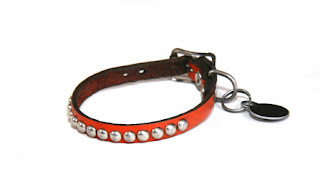 I received an amazing note from a dear client of mine, Seanne Moulton, recounting an experience she had a few days ago during a mediumship demonstration conducted by Francesca Kimpton, a psychic medium from the UK who now lives in California.

"Francesca was talking to a gal in the audience when she stopped and asked, 'Does someone have a dog who just recently passed?  I mean, very recently?  Because there is a dog here who keeps running back and forth in front of me.  He seems so happy.'

A woman raised her hand, and Francesca immediately knew it was this woman's dog.  She said the dog was running up to all of the spirits who had come through and had been rolling on his back for a belly rub.  The dog couldn't stop talking about the new tag his 'mom' had purchased for him, just before he passed.  The woman confirmed that indeed, she had just bought her dog a new tag, right before he died.

The dog kept talking about how proud he was of that tag.  The woman confirmed that he had been parading around, showing off that tag like he was at a beauty pageant.

Then, the woman's father came through and tried to pick up the dog, saying, 'Come on, all these people didn't come here to listen to a dog!'  But the dog responded, 'Oh yes, they did!'  He said he just wanted his mom to know she was the best mom he could ever have asked for.  He said he always heard her when she talked to him, and he knows she has been crying a lot since he died.  He wanted her to know that he still lays on the pillow with her, just like he used to.

The woman's father chimed in and said to the dog, 'She cried more when you died than she did when I died!'  And the woman confirmed that yes, that was true.  Her dog continued to lick her father, and then rolled on his back for more belly rubs. . ."

If you're fascinated by the idea that we can connect with our animals after they've been released from their bodies, you won't want to miss The Conference on Animals in the Afterlife, on Sunday, November 3rd in Boxborough, MA.  Psychic Medium Joanne Gerber will be doing spontaneous spirit readings, and we hope that just like the dog in Seanne's story, departed animals will be among those who come through.

Register today to get the early bird rate of $149 for the whole day.  You can join us for the afternoon, to hear Kim Sheridan's keynote and be part of Joanne Gerber's gallery, for just $99.