Dozens and possibly hundreds of feral cats living in a secluded cargo area at New York's Kennedy Airport are being trapped and otherwise "rounded up" by the Port Authority of New York and New Jersey. Despite protestations to the contrary, it appears that these hapless cats are destined for death, rather than re-homing.

The Port Authority claims that the cats are attracting birds that could interfere with incoming or outgoing planes, but that strains credulity, in that the cats are inhabiting an area far from the runways. They are also doing a service by hunting and eliminating rats and other rodents.

The undeserved killing of these homeless felines, regardless of how it is done, is an unnecessarily ruthless solution to a dubious problem, particularly in light of offers from numerous humane-minded groups, including Neighborhood Cats, which advocates a Trap-Neuter-Return approach to feral cat colonies, to resolve the situation in a more civilized and compassionate way.
Posted by Maureen at 11:52 AM No comments:

Mourning the Death of a Champion

It's the morning after the Breeders' Cup, but I am not celebrating.

For me, the magnificent triumps of the last two days have been washed away in a sea of grief for the tragic death of Ireland's gallant champion, George Washington (Ire), who was euthanized just minutes after he was pulled up at the end of the Breeders' Cup Classic, having suffered a catastrophic injury on a muddy quagmire of a racing surface to which he was unaccustomed and ill-suited.

There is a fine line between good sportsmanship and greed and hubris. In the case of "Gorgeous George," as he had been affectionately nicknamed by his appreciative fans, it's hard not to come to the conclusion that he lost his life in pursuit of his owners' desire to prove something.

When this talented colt proved less than fertile at stud last year, he was pulled out of retirement and brought back to the rigors of competition. And that is what led to his untimely, sickening demise, in front of thousands of spectators and millions of TV viewers. It was a terrible, undeserved death. In spite of the on-call veterinarians' hesitancy to blame the boggy track conditions for the injury, can there really be any doubt that the mucky surface caused turf-loving George Washington (Ire) to slip and take a series of missteps that ultimately proved fatal?

I am sure that trainer Aidan O'Brien, his staff, and everyone who nurtured George Washington (Ire) to greatness are devastated by his death. Yet I ultimately have to wonder why they put him in harm's way.
Posted by Maureen at 10:42 AM No comments:

Cats as Companions During War

Former New York Times Bagdad Bureau Chief John Burns writes about the way in which cats managed to ingratiate themselves into the lives of the journalists who cover the war, in "What Cats Know About War," published in today's "Week in Review" section.

The veteran war correspondent, who has covered conflicts in most of the bloodiest venues of the last 30 years, recently left his post in Iraq but recalls with fondness how the routine of caring for itinerant felines behind the walls of The Times' walled compound brought a measure of compassion and humanity into an otherwise danger-filled beat.

He tells of the bitter winter night when he rescued a tiny, scrappy kitten whom he subsequently named, "Scooter":

"Watching her, and the two litters of kittens she had over the following 18 months, offered we humans a new reaction to the cacophony of the war. The bloodiest suicide bombings, even miles away, have the sound and feel of the apocalypse, causing humans to freeze, no matter how often they experience it. Cats need to hear it only once. As they skitter to the safety of trees and bushes, they enter the blast and the tremor on the hard drive of their brains. On the next occasion, come the blast, they barely stir. "

But because of Burns' kindness and perseverence in negotiating their way out of Iraq when he left the country last summer, Scooter and her progeny are now out of danger, safely ensconced in England, and "liberation into a green and pleasant land where they would be full citizens, never again wanting for shelter, warmth and food. "
Posted by Maureen at 9:21 PM No comments: 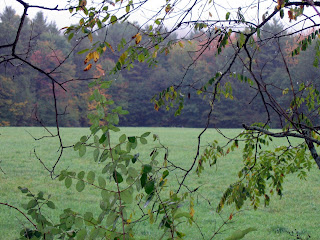 Turkeys in the Mist

The parade of wildlife continues.

On this cool, drizzly morning, I was treated to a meadowful of wild turkeys, spread across the grassy field like a line of Rockettes, foraging for the fruits of early fall.

By the time I ran back to snatch my camera and click some photos, the 11-member flock was disappearing into the dense woods at the far edge of the field.

Their appearance felt like a gift of encouragement on a dreary day. Wild turkeys have held a special significance for me since the death of my younger sister, Janice, in April, 2003. In desperation at the thought of never seeing her again, I asked her to send me wild turkeys as a sign of her continued presence. I don't know why: I had never had a particular attachment to these large colorful birds, which are at once so common yet so elusive throughout central Massachusetts.

Yet almost as soon as I whispered this prayer, the turkeys began to come. They appeared constantly, and everywhere, and often in the most unlikely of places, such as suburban driveways, highways, and even hiding behind telephone poles. One day, when I hadn't seen a turkey for a while, I began to despair, fearing that their seeming disappearance was a sign that she was no longer with me. Within minutes, a turkey appeared in the middle of the road, in front of my car. The message from my sister could not have been more clear.

So everytime I see these magical birds, I know that Janice is also nearby, unseen, but very much in the picture.

I only wish I had brought my camera on my morning walk along beautiful Mason Road in Holden today.

The usual peace and tranquility was disturbed by a crew of workers who were rudely slashing down brush and what they perceived as nuisance trees along the road. I wasn't the only one who objected to their insensitivity. Not 20 yards from the tree cutters' saws, I heard the brash rat-tat-tat of an incensed woodpecker, who obviously disapproved of the carnage. I looked up and just above me, a beautiful Pileated Woodpecker pranced around the trunk of a deadened tree. I've been walking up and down this road for eight autumns now, and have never even glimpsed one of these proud, pointy, red, white, and black specimens before. I felt that the woodpecker had appeared to claim his territory, and to do his best to try to show the unwelcome intruders that they had trespassed on his turf. The more trees they savaged, the fewer there were to feed this insect seeker, and his kin.

Whether it was the disturbance of the loud machinery or just happenstance, I saw another furtive animal, a Fisher cat, just moments later, as it hurriedly crossed the road several feet in front of me, from one deeply wooded area to another. Tree-living Fishers have become abundant in the greater central Massachusetts area, and are notorious as vicious hunters of unwary domestic cats. I had never seen one before, but have frequently heard their blood-curdling screams in the woods behind my home, usually under cover of darkness.
Posted by Maureen at 10:11 AM No comments:

In her article entitled, The Ambivalent Bond with a Ball of Fur, published today, The New York Times science writer Natalie Angier muses on the recent death of her beloved cat, Cleo, noting that she was somewhat taken aback at the extent of her grief at his passing.

She attempts to dissect the glue of the human-animal bond, but doesn't quite succeed, in my view. Ms. Angier is a science writer, after all, and she paints a rather dispassionate view of the traits that make our animal companions so beloved to so many people, while noting with some disdain that "we abandon difficult pets, and shelters euthanize some 10 million pets a year."

I simply do not share Ms. Angier's ambivalence about the rightful place of animals in my life. I embrace them without worrying about whether I am being too sentimental, and try always to treat them as sentient individuals, each deserving of respect and dignity.
Posted by Maureen at 12:12 PM No comments: