The Magic of Animal Telepathy

Whether you know it or not, your animals are communicating with you all the time. You may not be “hearing” them, because their language is a silent one. It’s the language of telepathy, and though it doesn’t necessarily express itself in familiar words, it’s our animals’ native tongue.

As a professional animal communicator, my role is to translate animals’ telepathic messages into everyday language, and to open a window into their minds and hearts so their human companions can better understand how profoundly their pets understand them. By listening to the silence of the animals, I am almost like their therapist: someone who can really hear their thoughts and sometimes, literally feel their pain.

The stories they tell me can be funny or amazing, but they always demonstrate that animals have a sensitivity and sensibility that exceeds anything we might have imagined.

A few months ago, during a session with a black cat named Manny, who has cancer, I perceived that he was showing me an image of a bridge. I assumed that perhaps he might be able to see a bridge from the window of his urban apartment, and mentioned that to his person, Lisa.

“No,” Lisa said, “we can’t see a bridge from our window, but I have been reading the poem, ‘The Rainbow Bridge,’ to him, to let him know that it’s okay with me if he needs to go there.” Even though Manny had never actually observed an actual bridge, he “saw” the bridge that Lisa had described in this poignant poem, and let me know that he understood her message.

All I knew about another cat, Marcie, was that she had been diagnosed with a terminal illness. Her person, Sandy, had not shared with me the nature of her cat’s physical ailment, but as soon as I connected with Marcie, she showed me that she was receiving subcutaneous fluids. I was astonished when Sandy confirmed that in fact, Marcie was suffering from Chronic Renal Failure, and that she received the sub-q fluids every other day!

But Marcie wasn’t feeling sorry for herself, not one bit. She had a lot of other things to say, including the fact that she liked pizza! I honestly thought that I must have misinterpreted this part of Marcie’s message, and was hesitant to share it with Sandy. But I always try to accurately convey the information I receive from an animal, even if it doesn’t always seem to make sense, so I told Sandy about Marcie’s pizza vision. She laughed, and said that at her house, Friday is “pizza night,” and as soon as the steaming pie is served, Marcie jumps into the warm pizza box and luxuriates there, while everyone else is eating!

My conversations with animals have taught me that it’s virtually impossible to keep a secret from them, and conversely, that they will confide your secrets if given the opportunity!

A few years ago, a young couple, John and Carol, asked me to communicate with their two cats, Joe and Vito. Joe was very sick, and the couple wanted to get his, and Vito’s, perspective on what was happening in the household.

During my session with Vito, he told me that he was worried, because he knew that John and Carol were thinking about getting another cat. When I told them about it, John and Carol were in disbelief. They acknowledged that they wanted to introduce another cat into the family, but told me that they had been extremely careful never to talk about their intention in front of Joe or Vito! In fact, they had only discussed it on the phone, from their respective offices, or when they were outside the house.

I explained to them that it didn’t matter one iota that they had never actually talked about the new cat out loud, because Vito had done what cats are so good at: he had read their minds. He was completely aware of their plans, in spite of their efforts at secrecy!

When it comes to keeping your own secrets safe, I’ve learned that animals won’t necessary cooperate. We all know that animals have incredible memories, but what most people may not realize is that animals can describe, in very vivid terms, situations in which they were abused or badly treated, even when the mistreatment happened months or years in the past. The perpetrator who hits a dog in the privacy of his own home or yard may assume that no one will ever know anything about it, but given a chance, the dog will tell all.


One of my canine clients, a feisty Scottie named “Freddy,” told me that he wanted desperately to play with his human “brother,” Chad, and his friends, but he showed me that when he tried to join their games, the boys smacked him on the nose or on the side of his head, in the hopes that it would make Freddy so away.

I realized that this was a potentially dangerous situation for all concerned, and I knew that I had to share Teddy’s story with Chad’s mother. When she received the transcript of my session with Teddy, she printed it out and showed it to Chad, who seemed very surprised at being “caught in the act,” and exclaimed, “I’m busted!”

Chad had never stopped to think that he might really be hurting his dog, but when he read Teddy’s uncannily accurate description what had been happening, it touched his heart. By revealing their “secret,” Teddy had helped Chad realize that he deserved to be treated with respect and kindness, just like any other member of the family.

****
This article appears in the current issue of The Animal Print.
Posted by Maureen at 12:50 PM No comments:

Tell the University of Michigan to Stop Killing Dogs!

I was horrified to learn about the University of Michigan's unspeakable practice of having their students practice emergency trauma intervention techniques on live shelter dogs, and then, after the dogs have been cut open, injected, and thoroughly used up, killing them.
The University's use of perfectly healthy dogs for this purpose is not only unconscionable, it is illegal, according to the Physicians Committee for Responsible Medicine (PCRM), which has filed a formal complaint against the University of Michigan's Ann Arbor facility with the USDA's Animal and Plant Health Inspection Service, alleging that the practice is a violation of the federal Animal Welfare Act "because the principal investigator provided false information about alternative nonanimal technologies to justify animal use in his protocol."
Philadelphia Examiner Dog Advocate Megan Drake wrote an excellent piece exposing this horror on January 15th, where she points out that of 150 Advanced Trauma Life Support teaching facilities surveyed, "more than 90 percent use exclusively non-human models and no longer inflict injuries on dogs for practice." Why, then, she asks, is the University of Michigan continuing to use living dogs for this purpose when it actually has its own state-of-the-art simulation lab? Why indeed!
The PCRM poignantly identifies two of the hapless dogs who were victims of the University of Michigan's barbaric techniques: "a silver-and-black malamute named Koda and a wandering golden retriever picked up while still wearing his blue collar." These were not sick or unloved dogs, and the heartache that their people must have experienced upon learning the fate of their canine friends is almost unimaginable.
We can prevent other dogs from being seized and similarly tormented. Please take a minute to add your voice to those who are determined to Save Dogs From Trauma Training at the University of Michigan.
Posted by Maureen at 10:58 AM No comments:

A Final Memorial to Casey 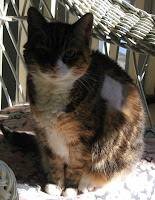 I was very touched to receive a letter from The Winn Feline Foundation, letting me know that Casey's primary veterinarian, Dr. Brian Holub of the Countryside Veterinary Hospital in Chelmsford, had made a donation in Casey's memory.

Amidst all of the hurt that I still feel at having lost Casey, it helps to know that her death may in some way contribute to the well-being of other cats. I am extremely grateful to Dr. Holub for remembering Casey in this way, and for everything he did to enhance and preserve Casey's quality of life, often under trying circumstances.

The Winn Feline Foundation is a nonprofit organization that supports studies related to cat health. To-date, it has awarded more than $3 million in grants for research to benefit cats suffering from a variety of conditions, including many types of cancer, upper respiratory problems, and kidney disease.

Dr. Holub himself is a Veterinary Advisor to The Winn Feline Foundation, helping to review grant applications submitted for funding.

For the second year now, I was privileged to participate in the Concord Circle of the annual Audubon Christmas Bird Count. It's an exhilirating experience and I wish I had gotten involved a long time ago.

Teams assigned by our area leader Steve Morse embarked from the Sunlite Cafe on Rte. 117 into the cold clear morning around 7:30am, and the winds initially made our treks over open frozen areas in the Gardner Hill area of Stow a bit challenging. But the sun warmed us as the morning aged, and my partner, Wendy Miller, and I were pleased to identify 25 species in total, including a Sharp-Shinned Hawk.

For three and a half hours, we diligently scoured every inch of our assigned territory, and in addition to the thrill of finding a respectable cache of species, the experience heightens one's senses and clears one's mind. Every ounce of our attention was intently focused on hearing or espying the sought-after avian residents, regardless of whether they might be hiding or just waiting to be discovered in plain view.

It's a wonderful exercise to sharpen one's intuitive senses, too. Sometimes, birds are found simply because a team member has a hunch to look up a particular tree, or over her shoulder, or into a certain hedge of brambles.

I can't think of a better way for an animal communicator--or anyone who wants to feel a closer bond with the creatures of the natural world--to have spent a glorious winter Sunday morning.
Posted by Maureen at 7:04 PM No comments: