Documenting Visitations from Animals in Spirit

Jeff Belanger's GhostVillage.com is devoting this month's Message Board to a discussion of apparitions from animals in spirit (spirit animals, if you will!), asking the question, "Can animals stick around our earthly plane even after their death?"

The respondents have provided often-fascinating accounts of after-death visitations from beloved animal companions, which I think will be of particular interest to people who are still grieving from a recent loss.

I think that Newman, our 16yo Himalayan cat stayed around for awhile after we had to put him to sleep. I would find his toys lying in the middle of the floor like he was playing with them still. He used to shed clumps of fur on my dark carpet, so after he died, I did a really thorough job of vacuuming and shampooing the carpet. About a week after that, I came home from work and found tufts of his fur in the middle of the living room just like when he used to roll on the carpet and it would come off.

My first cat was killed 8 years ago in my yard on Thanksgiving Day. I was hysterical since we were very close. From that day on until about 2 years later, I would feel him getting on my bed when I would get in bed. He would walk around for a little while and then settle down like he had always done. I would see the indentations although I couldn't see him. Sometimes in the middle of the night he would get down. I adopted two other cats within that time and they would stand staring at something in my bedroom but they never seemed concerned.

To follow or contribute to this fascinating discussion, visit GhostVillage's Board of the Month.
Posted by Maureen at 10:10 AM 3 comments: 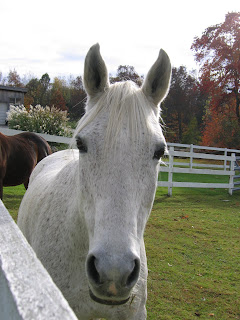 I had no idea that as a State Senator, Barack Obama had sponsored legislation to end the slaughter of horses in Illinois. The state's Cavel slaughterhouse was finally closed in 2007, after a series of court battles.

Obama reasserted his commitment to animal rights yesterday, while campaigning in Nevada, in response to a question from a member of the audience. "I think how we treat our animals reflects how we treat each other," he said. "And it's very important that we have a president who is mindful of the cruelty that is perpetrated on animals." Amen.

Posted by Maureen at 9:16 AM No comments:

It's All About the Birds 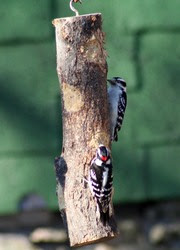 For years, I've wanted to participate in Audubon's annual Christmas Bird Count, and this year, I actually did.

Just after dawn on Sunday, December 30th, I was privileged to be partnered with Steven Moore, the expert Stow/Maynard/Bolton area coordinator for the Concord CBC circle, and Katherine Reiner, a knowledgeable veteran birder, and we embarked on a 6-hour survey of the town of Maynard, in search of as many species and individual birds as we could find. For me, it was an absolutely wonderful experience, topped by the sighting of an Osprey roosting in the branches of a Weeping Willow over the Assabet River, which is a rare event in these parts, particularly at this time of year.

Since last Sunday, I've been like a kid in a candy shop, single-mindedly adding new feeders, seed varieties, and a heated birdbath to my yard, in an effort to lure more species out of the woods. Thanks to my years of "birdscaping," my home is surrounded by numerous fruit trees and berry bushes, which seem to be sustaining a large flock of wintering robins. I can only hope that they are joined by some Cedar Waxwings!

In an effort to attract more woodpeckers and perhaps some red-breasted nuthatches, I wanted to add some suet, but as a semi-vegetarian, I couldn't justify the purchase of the usual beef fat blends, so I wasn't sure I'd be able to create a tempting buffet for these tree-hugging species.

Imagine my delight, then, when I found three "veggie" varieties of suet, made by Pine Tree Farms, at Wild About Birds in North Grafton! I purchased several packages, as well as the birch log suet feeder pictured above, and am eagerly awaiting the arrival of the hungry guests!
Posted by Maureen at 2:59 PM No comments: