A breakthrough for Willow the cat 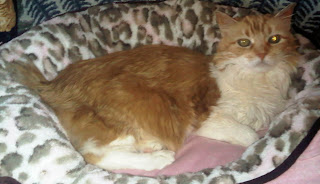 It had been a rough few months for Tina.  Her parents had died within several weeks of each other, and Tina was not only sad, she was exhausted.
Tina's dear cat, Willow, felt the stress, too.  Plagued by a variety of health issues, she needed medications to preserve her quality of life.  She hated them.  Whenever she saw Tina approaching with the meds in hand, Willow fled.
Though Tina could eventually catch Willow and administer the soothing salves, what she could not do was to stop Willow from peeing on the bed, the pillow, and the rug--everywhere except in the litter box.  I had worked with Willow on a similar problem about a year ago, and from then until now, she had been perfect in her bathroom habits.  But with the recent emotional upheavals, Willow's litter box manners had taken a downturn, and that was more than Tina could take.
That's when she contacted me.
When I checked in with Willow, she felt depressed and worried.  She fully understood that Tina was becoming increasingly upset with her, and that only seemed to be making things worse.  But something Willow said really hit me:  she said that she felt broken, and disposable.  She felt like she was just facing away, and that she didn't matter anymore.  I sensed that Willow wouldn't return to the litter box until her hurt feelings had been healed.
It was hard to tell Tina what Willow had communicated.  I knew that Tina loved her with all her heart, and would do anything she could to help her precious feline friend feel better.  At the same time, Tina admitted that there were times when she'd had fleeting thoughts of re-homing Willow if she continued to urinate on the bed. Tina knew she'd never follow through on those silent threats, but still, they hung in the air, palpably enough for Willow to read them, internalize them, and conclude that she was, indeed, "disposable."
I suggested that Tina talk with Willow in a way that she'd never done before, letting the sweet orange cat know that she cherished her and that she would lovingly care for her forever.  It worked.
Within 24 hours, Tina messaged me to say that willow had made it through the night without a wet spot in sight.  Three days later, she sent me this quick note:  "Day 4 and no pee.  And Willow is as cuddly as ever.  It's amazing!  Keep your fingers crossed, and thank you so much!"
Posted by Maureen at 4:50 PM No comments: 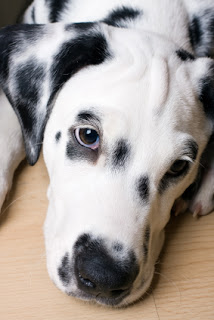 Through the end of September, I'm offering a 20% discount on telepathic consultations with all animals whose breed begins with the letter "D."


The reduced rates this month apply to Dachshunds, Dalmations, Dobermans, Devon Rexes, Dutch Warmbloods, and to all other breeds of dogs, cats, horses, or other animals whose breed begins with the fourth letter of the alphabet.  Both new and current clients of Animal Translations are invited to take advantage of this program.


I'll continue the "ABCs of Animal Communication" promotion in October, when it will be offered to breeds that begin with the letter "E."


The standard fee for an animal communication consultation is $75.  Clients whose animals qualify for the reduced rate this month can purchase a session for $60 by visiting the Animal Translations website.

Posted by Maureen at 2:19 PM No comments: