Filling the Empty Seat Next to My Heart 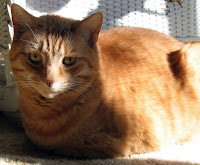 Something interesting has happened since Casey died.

Casey was my heart cat; she was literally engulfed in my aura and it felt like she was a part of me whenever we were near. And when we were in the same space, we were almost always in the same place. Literally. Casey slept next to me, and even sat on my chair as I worked. We were almost inseparable.

When Casey was in her physical body, there just wasn't room for my other cats, Neil and Glenda, to get that close. But now, it feels almost like I am in a theatre and there is an empty seat next to me. But not for long. My beautiful, empathetic, charismatic orange tiger, Neil, has slipped into that seat and seems determined to claim my heart. It feels like he is succeeding.
Posted by Maureen at 11:30 AM No comments:

I'm so pleased, on this auspicious Christmas Eve, to announce a project that I've been working on for the last several months: The Animal Communication Book Club!

is my new companion blog, with a focus on reviews of books that I hope will be of interest to my clients and to everyone who is blessed with the companionship of an animal. The topics will include telepathic animal communication, of course, but I'll also highlight authors who bring a fresh perspective to all of the ways we interact with animals, and they interact with one another, to enrich our life on this planet.

My biweekly reviews of both new and trusted volumes will be published in print and via podcast, to enable blind and sight-impaired animal lovers to participate and enjoy our conversations.

As Editor-in Chief of The Animal Communication Book Club, I'll also be conducting live interviews with animal authors that will be available via Mp3 for later listening. Watch for more details of my Internet Radio debut on the BlogTalkRadio platform.

The best thing about The Animal Communication Book Club is that it's free! There's no obligation to do anything, but enjoy the experience. I look forward to sharing it with you.

On the terrible day in November that I had to bring Casey to the vet's office for the last time, something unusual happened.

At my request, Dr. Gifford had administered a sedative, prior to the final injection, so that Casey would be relaxed and calm before she drifted into her permanent sleep.

As the relaxant took effect, Casey laid on her side, without moving, and I looked deeply into her eyes, stroking her and whispering how much I loved her.

Casey began to slowly and deliberately blink her eyes. I had never noticed her doing that before, and I wasn't sure why she was doing it now, at this fateful moment. As I struggled to keep my turbulent emotions in check, my telepathic prowess deserted me; there was no time to ask Casey or intuit what she meant.

So it was with tremendous gratitude and wonder that I stumbled upon a moving explanation of this gesture in Dusty Rainbolt's engaging book, Ghost Cats: Human Encounters with Feline Spirits (which I will be reviewing in the December issue of my monthly eNewsletter, "What's Up With Animals?"):

"A slow blink is one of the ways that cats communicate affection--sort of a kitty kiss."

I now realize that Casey was saying, "I love you," one last time. She was saying, "good-bye," in the only way she could, and I will always treasure that memory. 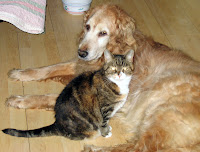 We are all so maddeningly busy that the time we spend with our animals tends to be taken up by the "must do's."

Your cat, dog, horse, bird, goat or hamster must be fed, watered, exercised, groomed, trained, and seen by the vet for periodic checkups. There are occasional cuts and bruises that must be attended to, and trips to the pet store or grain mill to pick up food, bedding, and supplements.

It's our love of our creature companions that motivates us to spend our time and money and energy to ensure that they have a comfortable, happy life, and it's gratifying to be able to accomplish this much.

But if you aspire to open up the telepathic channels of communication with your animal, the best thing you can do is to stop.

Sit with her, breathe with her, and let silence reign for as many precious minutes as you can afford. Consciously open your heart, and your mind, and then let what will be, be. You may be surprised at what you hear.

Why Dogs Can Sense Fair Play

Here's a fascinating article about how dogs experience a wide range of complex emotions, including jealousy, based on research conducted at the University of Vienna and reported by CNN:

"LONDON, England (CNN) -- Dogs appear to experience a range of complex, unpleasant emotions such as jealousy and pride, scientists have discovered.

Dogs hate their owner showing affection to other dogs.

Until now, this type of behavior had only been shown in humans or chimpanzees, but researchers suspected that other species that live together could be sensitive to fair play -- or a lack of one.

'We are learning that dogs, horses, and perhaps many other species are far more emotionally complex than we ever realized,' Paul Morris, a psychologist at the University of Portsmouth who studies animal emotions, told The Sunday Times. 'They can suffer simple forms of many emotions we once thought only primates could experience.'

Scientists noted that dogs hate to see their owners being affectionate to other dogs and can suffer if a new baby or partner arrives on the scene.

To test the theory, Friederike Range and colleagues at the University of Vienna in Austria asked 33 trained dogs to extend a paw to a human. The animals performed the trick virtually all of the time whether they were given a reward or not -- when alone or with another dog. But the dogs' enthusiasm waned when they saw other dogs being rewarded but received nothing themselves.

Dogs that were ignored extended their paws much less often, doing so in only 13 out of 30 trials. They also showed more stress, such as licking or scratching themselves. 'They are clearly unhappy with the unfair situation,' Range told New Scientist magazine.

She also suspects that this sensitivity might stretch beyond food to more abstract things like praise and attention. 'It might explain why some dogs react with 'new baby envy' when their owners have a child,' she said."

More Details About the Animals Seized in Vermont

According to the attorney for the couple whose animals were seized last week, any neglect of the animals was "not intentional."

Cristina Kumka of the Rutland Herald reported yesterday that criminal defense attorney Peter Langrock, who has been retained by the Hegarty family, said, "This isn't a case where you have a woman who doesn't care about her animals." The Hegartys operate La Chandolaine Farms in Brandon, VT.

Thirty-two "house pets" belonging to the Hegartys are currently in the care of the Rutland County Humane Society in Pittsford, while 60 horses, ponies, and donkeys are being housed and fed by the Spring Hill Horse Rescue in Clarendon.
Posted by Maureen at 12:48 PM No comments:

According to reports in the Rutland Herald, WCAX, and on Pet-Abuse.com, more than 110 neglected, malnourished, and physically compromised animals were seized from farms in Hubbardton and Brandon VT on Friday, December 5th, after what the Rutland County Sheriff's Department termed as "the largest animal cruelty investigation in years."

The small animals have been placed in the care of the Rutland County Humane Society in Pittsford, VT, which had announced last month that it could no longer accept stray or owned cats or kittens because its facilities were already strained beyond capacity.

The approximately 50 equines that were removed from the farms are currently being cared for by the Spring Hill Horse Rescue in Clarendon, which was also housing more horses than its facility could properly handle before the emergency seizure last Friday.

Both rescues are in immediate need of contributions and supplies, and each will be seeking foster homes for the animals in its care as soon as they can safely and legally be moved to temporary placements.
Posted by Maureen at 8:49 PM No comments: 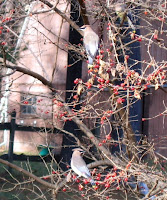 When I moved here 13 years ago (almost to the day), I was determined to create a backyard habitat that would be welcoming to native birds.

With this in mind, I have never used pesticides and I purposefully planted trees that would produce berries at this time of year, when pickings are scarce, to feed my avian visitors.

So I was simply delighted this morning to see that a small flock of Cedar Waxwings had joined the robins to feast on the red berries of one of the trees I had planted as a seedling, so many years ago. I'd never observed them here before.
Posted by Maureen at 11:04 AM No comments:

After my cat, Casey died, I wanted to do something concrete to keep her spirit alive--something that would help other cats and their people.

And so I've decided to create "Casey's Legacy," a virtual "fund" that will underwrite more than a third of the cost of telepathic consultations for cats with cancer.

Because cats can be masterful at disguising pain or disability until it has progressed beyond control, it can be useful to approach them telepathically, to tune into their aches and sensations and to assess their emotional and physical energy and their will to persevere. But when pet owners are facing sometimes extraordinary costs for the very best medical treatment to keep their cats alive, the idea of calling an animal communicator can seem like an unaffordable luxury.

I want Casey's Legacy to change that, by making routine telepathic "check-ins" for cats with cancer affordable for anyone who wants them. When we understand our cats' perspective, we can make better decisions about managing their care, and we can better support them if and when their condition deteriorates.

As of December 1st, 2008, owners of cats who have been diagnosed with cancer will pay only $40.00 for animal communication consultations with me, through Animal Translations. The usual fee is $65.00 for a non-emergency session.

I sincerely hope that my small contribution will make a difference to cats with cancer, and the people who love them.
Posted by Maureen at 11:12 AM No comments: